Island Brac is the largest middle dalmatian island. It is 40 km long,12 km wide, with 180 km coastal length, and it has the 395 square km of the total surface. Island Brac is important for the national tourism because of its vicinity to the town of Split, and for a large number of the guests, passengers and the tourists, who are visiting it. Since the ferry line, Split - Supetar, has become the most frequent maritime line in the Adriatic sea, island Brac and its port Supetar, has become the third busiest port in the Mediterranean.

Brac is famous middle dalmatian island after its beauty, nature, beaches, and its distance of 8 miles to the mainland. Many guests and the tourista are coming here to rest and swim in the clear sea. Brac has very interesting neighbourhood and the beautiful towns and coves. The highest mountain is Vidova gora, and with its 778 metres, it is the highest mountain on all the Adriatic islands. From its top, the beautiful panorama of the sea, surrounding islands and coast is seen. Every guests and tourist admires the Brac and its beauty.

Island Brac tourist destination has many advantages and attractions, because it has many beautiful towns, coves and beaches with a clear sea. It has about 2.700 sunny hours a year, with the average summer of 25 oC and the winter of 9 oC temperature. It has about 15.000 inhabitants and 24 towns. No one knows, which town is more beautiful, the seaside or the inland one. Island Brac tourist destination has good tourist offer and many objects which can provide the top tourist services during the season.

It is supposed, that island of Brac has got its name after the illyrian name of brentos- a deer. The roman people has given it the different names, like : Bractia,Brattia. Together with the island of Hvar, it has gained in importance, because of the fertile fields, the large number of the olive trees,vines,fig trees and wild animals. It has been settled since the ancient times, but the discovered proofs through the archaeological escavations, exists only for the people of Illyriens, Greeks and the Romans. Through the History Of Island Brac it was the transit station for the merchants who have traveled from the ancient island od Issa-Vis, to the town of Salona-the capital city of the large province of Dalmatia, and further to the Northern part of the Adriatic sea. The province has arisen after the Romans have conquered the local residents, in the year 9 AC After, the Avars and Slavs have destroyed the town of Salona in the 7th century, the Island Brac has become the sanctuary for numerous refugees. At that time, the town of Salona with the wider countryside, have had about 60.000 inhabitants. During, and after the attack, the inhabitants have been running away by the ships to the neighbouring islands : Ciovo, Solta, Brac, and to the towns of Tragurium-Trogir and Asphalathosu-Split. After their arrival, they have established the settlement of Skrip. Through its history of island Brac, many authorities have been changed : Byzantine, Hungary, Venice, Austria, France and numerous other ones. Only in the recent history, inhabitants and their setlements have removed to the coast. Except the cattle breeding, vines and the olive trees breeding, stonemasonry, agriculture and fishing trade, they have started to deal with the trade, marine, handycrafts and the tourism.

Blaca desert, is the buildings complex of the church, monastery and the cultivated fields, and is well known to the tourists who are gladly coming here to see this interesting place hidden under the rock on the south part of the Brac island. Poljica Republic monks have run away from the Turkish army in Bosnia, and came here. In the year 1570, the main building has been finished, so they could move in. Later the Blaca Desert was expanded with the additional objects needed for their life here. The last monk of the Blaca desert, don Nikola Milicevic has died in the year 1962, so this complex has become an empty monastery. Today, only tourists and the guests are coming here.

The Golden Cape Beach is in the list of the most beautiful world beaches because of its shape and the clear sea. It is located on the south part of the Brac island, near the town of Bol. It is supposed, that present triangle shape has got by the sedimentary cycle and by the activity of the sea waves and streams. It is characteristic for the cape of entering into the sea for 500 metres, and is still growing and changing its shape, influenced by the gravel screes alluvium and sedimentation, arround the underwater reef.

Island Brac and the town of Bol has got many rewards in tourism : The tourist flower, as the reward for the best tourist town in the category of the town with 5000 to 10.000 beds, the blue flower, for the third place as the best kept municipal centre in the Croatian seaside, the sunny flower, for the first place as the best kept municipal centre and the best garden arround the Villa Giardino in the Croatian seaside. These Rewards In Brac Tourism are the good advertisament for the island, so many guests are aimly coming here, to see these beaty of beaches and nature.

Mrduja sailing boats regatta is well known event during the tourist season and is 22 miles long. The start and the finish is in front of the Sustipan rocks near the town of Split and around the Mrduja island. Every year, Mrduja Sailing Boats Regatta has different number of the participants, between 200 to 300. It is very interesting to see these beauties on the sea catching the wind and sailing to the aim.Tourist are watching this event from the excursion boats. 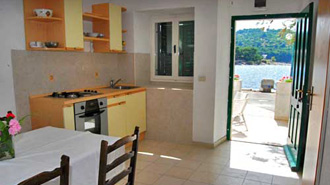